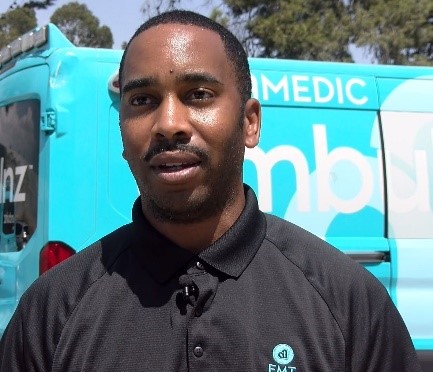 “I believe the Employment Development Department’s assistance is one of the reasons why I’m standing here now, instead of being unemployed,” says Hudena James, Jr.

Since he was a child, he always wanted to be a firefighter.

Despite a wealth of experience that includes not just having his pilot’s license, but also a tour of Iraq with the military and time working the Powerhouse Fire in 2013, he found himself lacking the right credentials to make his dream come true.

“One of the biggest steps in becoming a firefighter is becoming an emergency medical technician and then becoming a paramedic,” James, Jr. explains.

That’s where the Employment Development Department’s (EDD) partnership with the Workforce Development Center of Riverside County comes in. Development Specialist Thomasinia Marshall set James, Jr. up with the center’s EMT and ambulance driving training programs. The only problem, though, is that those programs cost money. A lot of money.

Thankfully, James, Jr. was able to enroll in the courses at no cost to him thanks to a grant from the EDD. The savings to him was more than one thousand dollars.

“It was like a scholarship,” explains James, Jr. “For someone to pay for my schooling and help me become an EMT, it was like a godsend.”

And he found good success in the program.

“Throughout the process, when he was telling me he was passing exams with 90 and above, I was I was quite impressed,” said Marshall, who guided James, Jr. through the process.
EMT training is not the only program available through the EDD and its partners.

“We have various programs like the nursing program, heavy equipment operator, cosmetology, so it’s just a wide range of vocational training,” comments Marshall.
And the catch for this level of support from the EDD? In short, there isn’t one.

“The only thing you owe us is to get a job [and] have a great life,” Marshall says.

Since his training ended and he earned his certificates, James, Jr. has found employment with Ambulnz, a mobile medical services and transportation provider with Southern California locations in both Torrence and El Monte.

“They liked my resumé and they liked the fact that I had my credentials,” explains James, Jr.

Now, he’s logging his hours as an EMT as he works towards his childhood dream of becoming a full-fledged firefighter – something he might not have realized were it not for the assistance of the EDD and the Workforce Development Center of Riverside County.